05 Apr 15 Foods That Are Low in Pesticides

Conventionally grown fruits and vegetables commonly have pesticide residues — even after you wash and peel them.

Still, long-term exposure to small amounts of pesticides may lead to health problems, including an increased risk of certain cancers and fertility problems.

Avocado is healthy, fatty fruit scored the number one spot for the least pesticide-contaminated produce item.

When the USDA tested 360 avocados, fewer than 1% had pesticide residues — and of those with residues, only one type of pesticide was found.

Keep in mind that foods are prepared prior to the analyses, such as by washing or peeling them. As avocados’ thick skin is typically peeled, most of its pesticides are removed prior to consumption.

Avocados are rich in healthy monounsaturated fat and a good source of fiber, folate and vitamins C and K.

However, this ranking doesn’t include residues of glyphosate, also known as Roundup, a controversial pesticide that some corn has been genetically modified to resist. The FDA has only recently started testing corn for glyphosate residues . 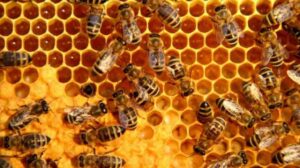 Notably, the EWG didn’t consider contamination of the environment from pesticides used to grow this tropical fruit.

Therefore, organic pineapple — whether fresh, frozen or canned — may be worth buying to encourage more sustainable farming methods.

About 86% of cabbages sampled had no detectable pesticide residues, and only 0.3% showed more than one kind of pesticide.
Since cabbage produces compounds called glucosinolates that deter harmful insects, this cruciferous vegetable requires less spraying. These same plant compounds may help prevent cancer.

Cabbage is also high in vitamins C and K, supplying 54% and 85% of the Reference Daily Intake (RDI) per 1 cup (89 grams) of chopped, raw leaves, respectively .

Even so, there are other reasons you may want to consider buying organic onions. In a six-year study, organic onions were up to 20% higher in flavonols — compounds that may protect heart health — than conventionally grown ones .

This may be because pesticide-free farming encourages plants to develop their own natural defense compounds — including flavonols — against insects and other pests .

Snap peas, however, didn’t score as well. Snap peas grown in the US ranked as the 20th cleanest vegetable, while imported snap peas ranked as the 14th most pesticide-contaminated vegetable.

These poorer scores for snap peas are partly due to testing the whole pod — as snap peas are often eaten with the pod. On the other hand, sweet peas were tested after shelling. The pod can be directly exposed to pesticides and is thus likelier to be contaminated (8).

Sweet peas are a good source of fiber and an excellent source of vitamins A, C and K .

Around 80% of papayas tested had no detectable pesticide residues, based on analyzing only the flesh — not the skin and seeds. The skin helps shield the flesh from pesticides.

Notably, the majority of Hawaiian papayas have been genetically modified to resist a virus that can destroy the crop. If you prefer to avoid GM foods, choose organic .

Papaya is a great source of vitamin C, supplying 144% of the RDI in 1 cup (140 grams) cubed. It’s also a good source of fiber, vitamin A and folate.

Weight management options have evolved
Take our quiz to learn more about techniques and tips that will help you achieve your goals.

About 90% of asparagus examined had no detectable pesticides .

Keep in mind that asparagus was tested after the woody, bottom 2 inches (5 cm) of the spear were removed and the edible part rinsed under tap water for 15–20 seconds, then drained.

Asparagus harbors an enzyme that may help break down malathion, a pesticide commonly used against beetles that attack the vegetable. This trait may reduce pesticide residues on asparagus.

This popular green vegetable is also a good source of fiber, folate and vitamins A, C and K.

Thiabendazole was the most common pesticide in contaminated mangoes. This agricultural chemical is considered slightly toxic at high doses, but the residue found on the fruit was very low and well below the EPA’s limit.

Eggplants are susceptible to many of the same pests as tomatoes, which are both in the nightshade family. However, tomatoes are number 10 in the EWG’s Dirty Dozen™ list of most pesticide-contaminated produce, which may be partly due to their thinner skin .

Eggplant has a meaty texture that makes it a good main dish for vegetarians. Try cutting a medium-size eggplant into thick slices, brush lightly with olive oil, sprinkle with spices and grill to make meatless burgers.

Of those with residues, no more than four pesticides and their breakdown products were identified.

Honeydew packs 53% of the RDI for vitamin C in 1 cup (177 grams) of melon balls. It’s also a good source of potassium and very hydrating, as it’s comprised of around 90% water.

In the analysis, 65% of kiwis had no detectable pesticide residues. Among those with residues, up to six different pesticides were noted. In contrast, strawberries — which hold the number one spot in the Dirty Dozen — had residues from 10 different pesticides.

Besides fiber, kiwi is a stellar source of vitamin C — supplying 177% of the RDI in just one medium fruit (76 grams).

However, harmful bacteria may contaminate the cantaloupe rind and transfer to the flesh when you cut the melon. The fruit’s netted rind and low acid levels make it conducive for bacteria.

To help remove bacteria — and potentially some of the pesticide residue — you should scrub cantaloupe and other melons with a clean produce brush and cool tap water before cutting. Always keep cut melons refrigerated to reduce the risk of food poisoning.

The pesticide imidacloprid was found to contaminate 30% of cauliflower samples. Though residue levels were well below the EPA limit, it’s worth noting that imidacloprid and similar pesticides are linked to declining honeybee and wild bee populations .

As a third of the global food supply depends on pollination by bees and other insects, choosing organic cauliflower can help support eco-friendly farming.

Cauliflower is a great source of vitamin C, packing 77% of the RDI per 1 cup (100 grams) of raw florets.

Additionally, cauliflower and other cruciferous vegetables are rich in plant compounds that help reduce inflammation and may reduce your risk of cancer and heart disease.

Broccoli isn’t bothered by as many pests as some vegetables because it exudes the same insect-deterring plant compounds — glucosinolates — as cabbage. Most of the pesticides applied to broccoli kill fungus and weeds rather than insects .