The oldest plant ever to be regenerated has been grown from 32,000-year-old seeds—beating the previous recordholder by some 30,000 years. (Related: “‘Methuselah’ Tree Grew From 2,000-Year-Old Seed.”)

A Russian team discovered a seed cache of Silene stenophylla, a flowering plant native to Siberia, that had been buried by an Ice Age squirrel near the banks of the Kolyma River (map). Radiocarbon dating confirmed that the seeds were 32,000 years old. 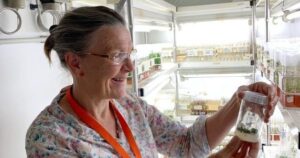 The mature and immature seeds, which had been entirely encased in ice, were unearthed from 124 feet (38 meters) below the permafrost, surrounded by layers that included mammoth, bison, and woolly rhinoceros bones.

The mature seeds had been damaged—perhaps by the squirrel itself, to prevent them from germinating in the burrow. But some of the immature seeds retained viable plant material.

The team extracted that tissue from the frozen seeds, placed it in vials, and successfully germinated the plants, according to a new study. The plants—identical to each other but with different flower shapes from modern S. stenophylla—grew, flowered, and, after a year, created seeds of their own.

“I can’t see any intrinsic fault in the article,” said botanist Peter Raven, President Emeritus of the Missouri Botanical Garden, who was not involved in the study. “Though it’s such an extraordinary report that of course you’d want to repeat it.”