Posted at 20:14h in News, Uncategorized by novival
Share 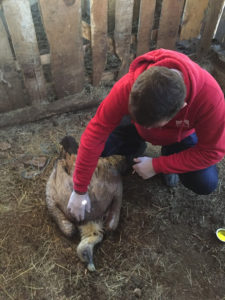 st of you know 22nd October ,2018 in Eco Centre in Blagaj Plenky was poisoned. In the beginning we didn’t find the problems seriously, his condition got worse and he died.

After few days we noticed that something was wrong with the griffon vultures and we informed local vets and Cantonal and Federal offices and tried to save the birds.

Since we didn’t   know what caused it , the samples are taken and sent to Vet’s  faculty in Sarajevo  for further  analysis. In the meantime together with the coleagues from Spain, Macedonia, Serbia we tried to save the griffon vultures by giving them medicines. The male Jablan  recovered a bit but the female Lily died after seven days.

Lily’s corpse was sent to patology in Sarajevo, and Jablan was stll monitored and we waited for the results. 22nd November Jablan died. We would like to inform the public that the birds weren’t infected by any of the viruses.  (West Nill  1 and 2, Avijar paramikso virusa  tip 1, influenca A virusa).  Prof.dr Teufik Goletić  did these analysis. Dr Amer Alic gave his opinion about the death of Lily

Based on macroscopic and microscopic point of view we think that the animal  had been  probably poisoned. Unfortunately we coudn’t tell the real source of poisoning now we coudn’t identify toxic substance. The worst thing is that there is a reasonable doubt that somebody deliberately poison the dogs, the cats   in Mostar area and in BIH ,too.

We have to stop it,

This will incite Novi Val to continue fighting for the survival of Griffon vultures and, of course, new birds will come, we will not stop here

We would like to thank you to all good people  which gave us support and been there for us.