20 May citizens against the construction of a hydroelectric power plant

Residents of the Neretva Valley in Konjic stopped the start of work on the construction of a mini hydroelectric power plant on Tuesday morning. 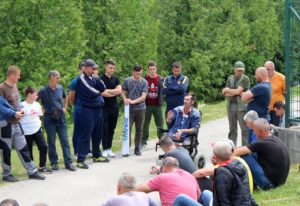 “With a lightning counterattack by volunteer units, they were prevented in their plan, and the introductory scenes, when two people at two locations stopped the work on placing the plates, although not recorded by the lens, will be remembered forever,” the locals described the course of resistance.

After the reaction of the citizens, they say, the contractors buried the dug holes, loaded the signs and machines and withdrew. Mechanization of the consortium Amitea d.o.o. Mostar and GPI d.o.o. Konjic was stopped at the locations of Gorovnik and Srijanski most.

They claim that they will fight frantically against the construction of mini hydroelectric power plants in the Neretva Valley!