01 Jun Extinct species of bird came back from the dead, scientists find

Posted at 10:49h in News, Uncategorized by novival
Share

A previously extinct species of bird returned from the dead, reclaiming the island it previously lived on and re-evolving itself back into existence, scientists have said.

The white-throated rail colonized the Aldabra Atoll in the Indian Ocean and evolved to become flightless, before being completely wiped out when the island disappeared below the sea around 136,000 years ago. But researchers found similar fossils from before and after that event, showing that the chicken-sized bird re-appeared when sea levels fell again a few thousand years later, re-colonized the island and again lost the ability to fly. 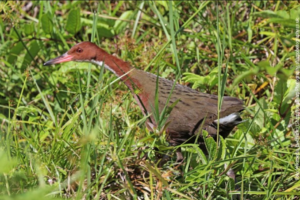 The flightless rail can be found on Aldabra to this day. The extremely rare process is known as iterative evolution — the repeated evolution of a species from the same ancestor at different times in history. The team’s study, published in the Zoological Journal of the Linnean Society, marks the first time the process has been seen in rails, and is one of the “most significant” instances ever found in birds, according to the authors.

“Only on Aldabra, which has the oldest palaeontological record of any oceanic island within the Indian Ocean region, is fossil evidence available that demonstrates the effects of changing sea levels on extinction and recolonization events,” Martill said.

“Conditions were such on Aldabra, the most important being the absence of terrestrial predators and competing mammals, that a rail was able to evolve flightlessness independently on each occasion,” he explained.
“These unique fossils provide irrefutable evidence that a member of the rail family colonized the atoll, most likely from Madagascar, and became flightless independently on each occasion,” the study’s lead author, Julian Hume of London’s Natural History Museum, added in a statement.

“Fossil evidence presented here is unique for rails, and epitomizes the ability of these birds to successfully colonize isolated islands and evolve flightlessness on multiple occasions,” he said.