September 5 is celebrated worldwide as the International Day for the Protection of Vultures, and the Youth Club Novi Val from Blagaj is also celebrating 13 years since the beginning of the project of reintroduction of Griffon Vultures to Bosnia and Herzegovina. The International Vulture Day aims to point out the very difficult situation of the vulture population in Bosnia and Herzegovina, but also in the world. The Novi Val Youth Club has been working since 2007 on the return of Griffon Vultures to their natural habitats, which is a very complex and complicated job. 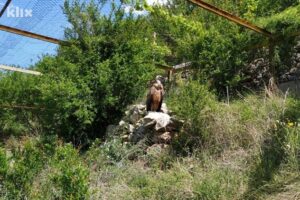 The griffon vulture lives in Blagaj again, and after 15 days in nature, completely exhausted, it was found in Olovo from the Uvac canyon. On the same day, Adnan Đuliman, the president of the Youth Club Novi Val, went to Olovo with the team from the Association and brought Luka to Blagaj in a transport cage for wild animals. He is cared for by members of the Novi val Youth Club at the Blagaj Eco Center, where the last pair of griffon vultures in BiH lived two years ago.

The whole story and bird rescue activities were monitored by the Federal Inspector of Nature Protection. Thus, according to all European directives, given that the bird is marked and has a GPS in coordination with people from the Republic of Serbia from the Association for the Protection of Birds of Prey (Belgrade, Serbia), the bird will 5.9.2020 at 12:15 from Kurbanište ”Across from Vrela Bune to be released in Blagaj. This event will be followed on the Facebook page of the Eco Center Blagaj, which will broadcast live the release of the bird into the wild.

Last pair of griffon vultures in BiH were female Lily and male Jablan, who lived in the Eco Center Blagaj. They died on November 23, 2018 from the effects of poisoning. The griffon vulture is one of the largest flying birds. It is 95-105 cm long, and in our country it usually weighs between 8 and 9 kilograms. In some individuals, the wing span reached almost 3m, but in most it is between 2.50 and 2.70 meters. They evolved as birds that feed exclusively on dead animals, mostly the carcasses of large mammals.