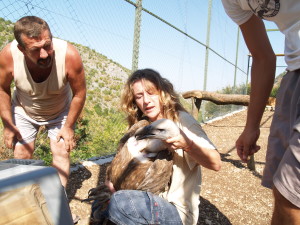 The Griffon Vulture, found weak in Pale by the members*OUR BIRDS* few years ago was sent to the collegues in Novi Val,named Jablan after the town Jablanica died two days ago. Few days earlier died female Lily probably poisoned, The society ,, OUR BIRDS* decided to start a campaign against poisoning wild animals in BIH to support the team from Blagaj . Despite the tragedy, they said that the efforts to return the Griffon vulture to Bosnia will continue. In order for them to survive, artificial feeders need to be put up . They are an endangered species but are very useful in an ecosystem because they feed on corpses and stop potential outbreaks of diseases among cattle. Since they have no natural predators, poisoning is the leading cause of death among the species. We appeal on people to inform us about the cases of poisoning other animals and help us to return the Griffon vulture to Bosnia and Herzegovina, Stop poisoning animals.