Wiener Linien, one of the biggest public transport operators in Europe, has added a hydrogen Solaris bus (earlier post) to its fleet for testing until 12 June. Since the première of the hydrogen bus in June last year, Solaris has been awarded orders from the Netherlands, Germany and Italy for 57 buses in total.

The first vehicles will make it to Bolzano, Cologne and Wuppertal by the end of this year. 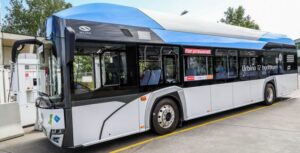 The Solaris Urbino 12 hydrogen buses use a set of fuel cells with a power of 70 kW. The hydrogen is stored in gaseous form in five new-generation tanks mounted on the bus roof. The set of type 4 composite tanks (of the latest generation available on the market), placed longitudinally above the first axle of the vehicle, has a total volume of 1560 liters.

The bus is also fitted with a Solaris High Power battery acting as an additional electric power storage facility. The sole by-products generated during the operation of the Solaris Urbino 12 hydrogen are heat and steam.

Solaris has been present in Austria since 2003 and over that time it has delivered nearly 400 buses to 40 cities there. Every day 53 of these are cruising the streets of Vienna and its outskirts, including on special lines transporting passengers to the biggest Austrian airport.